Lee Bennett Hopkins’ name is synonymous with children’s literature. He has written and edited numerous award-winning books for children and young adults as well as professional texts and curriculum materials; he has worked with many of the best-loved children’s authors, from Dr. Seuss to Madeleine L’Engle; and has taught elementary school and served as a consultant to school systems throughout the country. In 2011, Hopkins was recognized by Guinness World Records as the world’s most prolific anthologist of poetry for children, with 113 titles to his credit; that number continues to rise.

Born in Scranton, Pennsylvania, Hopkins graduated from Kean University and Bank Street College of Education, and holds a Professional Diploma in Educational Supervision and Administration from Hunter College. In 1980 he was awarded an honorary Doctor of Laws degree from Kean University.

Over the years, he has received numerous awards and accolades, including the University of Southern Mississippi Medallion for “outstanding contributions to the field of children’s literature;” the National Council of Teachers of English (NCTE) Excellence in Poetry for Children in 2009; and the Florida Libraries’ Lifetime Achievement Award.  He also has established two major awards:  the Lee Bennett Hopkins Poetry Award, presented annually by Penn State University for a single volume of poetry, and the Lee Bennett Hopkins/International Reading Association Promising Poet Award.

In addition to his anthologies, his own works include:

•Been to Yesterdays: Poems of a Life (Boyds Mills Press), an autobiographical book of poetry that received the prestigious Christopher Medal and a Society of Children’s Book Writers and Illustrators (SCBWI) Golden Kite Honor Award

Hopkins’ forthcoming anthology, All The World’s a Stage, based on William Shakespeare’s monologue from As You Like It, will appear next year with Creative Editions, illustrated by Guy Billout.

Lee, you’re not just a poet or writer; you are an acclaimed anthologist, as well, so you probably get to see a far more diverse representation of children’s poetry than most people. What is the current state of children’s poetry, and how does it compare to that which was being written 20, 30, 40, or even 50 years ago?

True. I see, have seen, a great deal of poetry. My library houses thousands of volumes by every major American poet. Entire walls are filled with single collections as well as anthologies dating back to 1915 when Emilie Kip Baker’s THE CHILDREN’S FIRST BOOK OF POETRY (American Book Company) appeared.

Like any other genre, poetry changes as society changes.

Poetry in America is still the baby of children’s literature, less than 100 years old, beginning in the 1920s with Hilda Conkling, a 10-year old prodigy, who published POEMS BY A LITTLE GIRL (Lippincott).

And, yes, we are still hearing about the place poetry has in our society. Get this:

“We hear much nowadays about the decline of poetry. No one reads poetry anymore. Poets cannot make a living…we are living in a reflective, a scientific, a prose age.”

This gem was written by Franklin T. Baker at Teachers College, Columbia University, in 1915 in the Introduction to Emilie Kip Baker’s anthology! It is interesting to note that between 1950 and 1970 poetry flourished with over 30 poets making debuts, incredible voices as Gwendolyn Brooks, Myra Cohn Livingston, Arnold Adoff, Shel Silverstein, and Eve Merriam.

A lull occurred in the 1980s with only four voices rising – Nancy Willard, Jane Yolen, Marilyn Singer, and Paul Fleischman – all of whom created a wide genre of books from picture books to young adult and adult works. In the 1990s more poets were published than in any other decade.

A horrible fact of 21st century publishing is that few anthologies are appearing. In 2011, three; 2012, five. Another concept is that publishers only want theme collections. Rarely does one see a BOOK of poetry offering one gem after another about a multitude of things. There aren’t any more collections such as Myra Cohn Livingston’s THE MALIBU AND OTHER POEMS (Atheneum, 1972) where one can read about “A Book”, turn pages to read “Father,” or empathize with “Little Dead” about burying birds, where the poet writes: “…I’ll dig a bed / warm and dark to rest your heads / and keep you singing with my words.”

If only one editor would take a chance, let a voice voice about his/her feelings, thoughts, wishes, wonders.

Today, with technology, it seems anyone can post a poem anytime they want to. It is instant-poetry-time. In previous decades, one had to “wait” for poetry, and for the most part it was worth the wait. No more. A click of Google will bring you globs of verse – some of which is very good, some awful, some of the worst verse ever seen. It is now, literally, a free-for-all. But free isn’t always the best we can give children.

When creating a poem, a self-penned book, or an anthology, are there ideas, words, or emotions that you have to wrestle with more than others, and how big a role does marketability play?

It is not the role of any true writer to write for a market. You must write for yourself, from within. Each book, each poem, each anthology poses its own set of problems and pleasures. The last concern would be marketability. It is up to the publisher to take care of this.

Once I delve into a subject, I research it to the fullest. Perhaps the most challenging series I did was based on Americana: HAND IN HAND: AN AMERICAN HISTORY THROUGH POETRY; MY AMERICA: A POETRY ATLAS OF THE UNITED STATES; and AMERICA AT WAR (all Simon & Schuster). All three volumes are rather large, definitive topics presented in poetry to complement studies and appreciation of our great United States.

Between e-books, e-readers like the Kindle and Nook, independent publishers, self-publishers, and print-on-demand services, technology has certainly thrown the children’s publishing industry for a loop. How is the industry evolving, and do you view these changes as positives or negatives?

Kindles, Nooks, and other varied forms of today’s technology are here, will stay, hopefully evolve for the better, and others will die out as quickly as boom boxes or 50 shades of any color one might think of!

Looking at something as wondrous as Maurice Sendak’s WHERE THE WILD THINGS ARE (HarperCollins) on a tiny machine’s screen is like watching GONE WITH THE WIND on an iPhone. A book is to hold, turn a page, relish words and/or pictures, keep in one’s mind and heart forever.

Is it possible to describe the perfect poem, or define the difference between a good poem and a great one? Having read so many, what is it you look for – in your work, as well as that of others?

The difference for me between a good poem and a great one is that a good poem is simply good. But a great poem such as Langston Hughes’ “Dreams” – a mere 8 lines – or his “Poem” – 21 words – show what a master of language can produce. When I read a work and utter “oooohhh,” I know in my soul it is a great poem. I’ve always gone on the “oooohhh” factor when selecting work for a collection.

You’ve been fortunate to know a number of wonderful, iconic children’s writers, like Theodor Geisel, Maurice Sendak (who would probably argue he didn’t write for kids), and current U.S. Children’s Poet Laureate J. Patrick Lewis, among others. What are the most important things you’ve learned from these relationships?

My earliest professional book, BOOKS ARE BY PEOPLE (Citation Press/Scholastic), was published in 1969. Over the course of my career, I have interviewed and/or met hundreds of writers and illustrators…writers are indeed people. They have lives as diverse as any other group of people. They have their successes, failures, life problems and pleasures, tragedies and triumphs. Being with, for example, Madeleine L’Engle or Lloyd Alexander, Ezra Jack Keats or Maurice Sendak, was no different than talking to a family member. They were people first, they became illustrious, but at the heart of it all they were real souls. And how I miss them. They not only gave love to their readers, they gave love to and for one another.

You have won numerous awards, like the NCTE Award for Excellence in Poetry for Children and the SCBWI’s Golden Kite Award; however, a rather unusual honor you received, of which many readers may not be aware, is recognition by Guinness World Records as the world’s most prolific anthologist of poetry for children. With more than 113 titles and more on the way, what have you learned about poetry, publishing, and people?

It was an astonishing moment in my life when I learned I was to be included in Guinness World Records. It was sparked by Sylvia Vardell at Texas Women’s University; Elizabeth Enochs, an elementary school librarian in Ft. Worth, Texas; and her then 13-year old son, Jeff. Thirteen seems to be a lucky number for me. At the time, the number of anthologies was 113, Jeff was 13, I lived a good part of my childhood at 113 Seth Boyden Terrace in Newark, New Jersey, and I was born on April 13th!

I have learned a great deal about poetry, too much about publishing, and I have gained a sincere appreciation of people who read and share poetry. 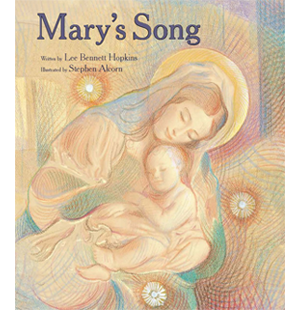 You’ve been receiving very positive reviews for your most recent book, Mary’s Song, which is a story about Jesus’ mother – told from her perspective – yet it’s not really about Christmas. You’ve even stated that you initially didn’t realize you were writing it in her voice! How did the concept develop for this book, and why did you choose to write it in poetic prose, rather than traditional free verse?

I always wanted to write about Mary as a tribute to Motherhood. I don’t truly recall writing the book. It seemingly just came, flowed. I knew deep inside it had to be about her being with her baby alone without all the fuss, hubbub we usually read about the birth of Jesus.  What mother doesn’t want to hold her child, hum to her son, bond with him/her without a host of people around? I wanted the one word – QUIET – emphasized. Stephen Alcorn created a work of splendor in the double-page spread with simply the one word.

Over the years, you’ve worked with countless authors, poets, and illustrators…written or anthologized more than one hundred books…given who-knows-how-many speeches, interviews, and classes…does anything surprise Lee Bennett Hopkins these days?

The things that surprise me could fill volumes. As for this moment, I’m still here and hope to offer some new surprises in the future!

And for aspiring writers and poets who may or may not yet be published – what advice would you offer?

If you want to write poetry, READ poetry. You must learn what is out there and learn from it. You might begin reading works by winners of the NCTE Poetry Award. Practice, practice, practice. Do not accept first, third, or even fifth drafts. Look at every single word, even each syllable. Writing is REWRITING. Learn your craft as you would if you wanted to be a baseball player, an artist, or chef. And don’t give up. We all started someplace, sometime. If the world needs anything more right now, it needs another Hughes or Livingston, a McCord or Sandburg. It might be you.

For more information about Lee, his books, awards, and journal, check out his website here!